Out of many web development frameworks that currently exist, few of them manage to enjoy the deserved popularity in 2021. Things won’t change pretty much in the following years as well since making a web framework or a web technology popular requires time for an entire generation to like, learn and apply the knowledge.

here are though surprises with previously popular web technologies that changed positions with others, which speaks that the market is flexible and dynamic – a genuine progress indicator in the tech industry. This is the list in non-canonical order of most mainstreaming web frameworks that should be followed for the rest of 2021 and 2022:

Vue.js was created back in 2014, by Evan You and represents a combination of Angular.Js and React.Js. Vue is a front-end web development framework that many believe it inherited the best features from Angular such as the end-to-end development functionality, external data flow, and state-management support. 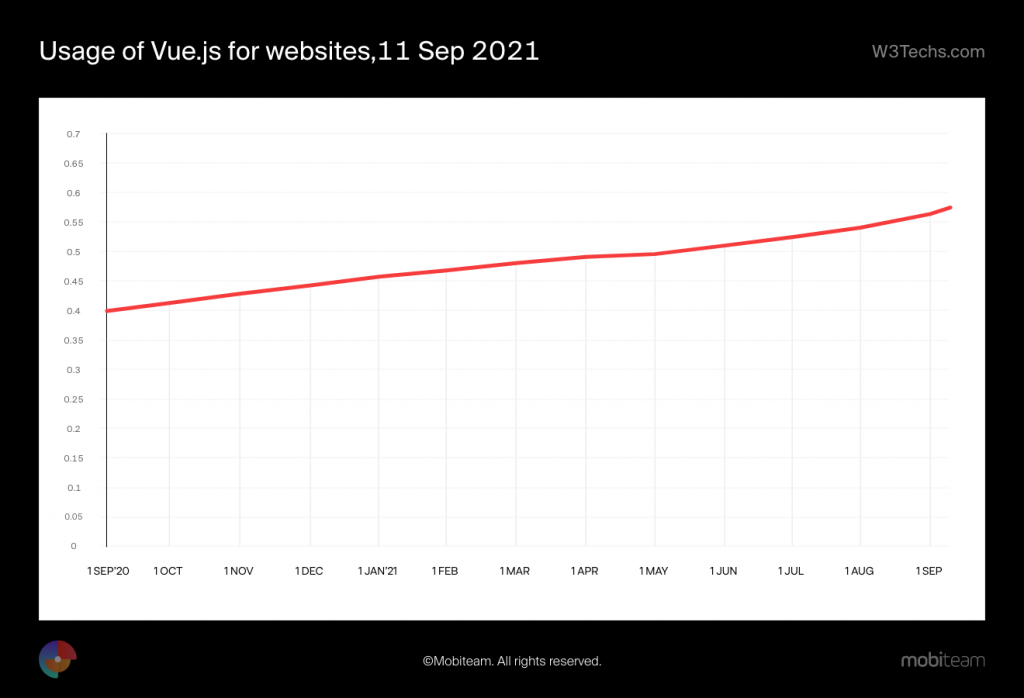 2020 was a year when web technologies gained popularity overall as the pandemic forced multiple businesses to move online, and a small share of it went to Vue. Specifically, Vue.Js is used more by websites with more traffic rather than SMB websites. However, Vue.Js websites are more optimized, modern, customizable and fast-loading which brings the web framework to the table of most modern front-end solutions in 2021-2022 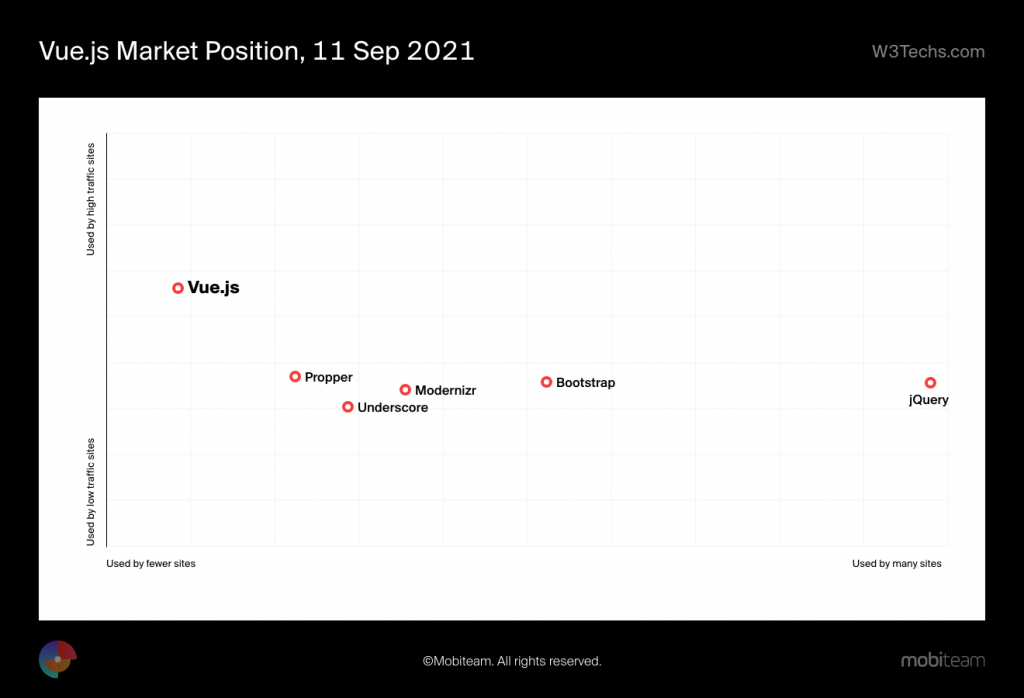 Vue.Js is used by a series of popular websites for a while now, and as far as we can see – it proved to be a convenient solution for those companies. Among them are:

In addition, the latest corporations that also started to use Vue.Js recently are Verizon, MSI, and DigitalOcean.

Taking into account the recent developments in IT, it is possible to see Vue in the upcoming year as one of the fastest-growing web technologies.

One of the most popular frameworks in the past 5 years is React.Js – a direct competitor of Angular and Vue used at way higher rates all over the world. Surprisingly, the pandemic played probably the best role in React.Js growth reaching 2.2% of global website usage in the past 5 months. If we take the same timeline September 2020 – September 2021, we can see that React had a lower starting point compared to Vue and managed to reach the same level and surpass the framework during April 2021. 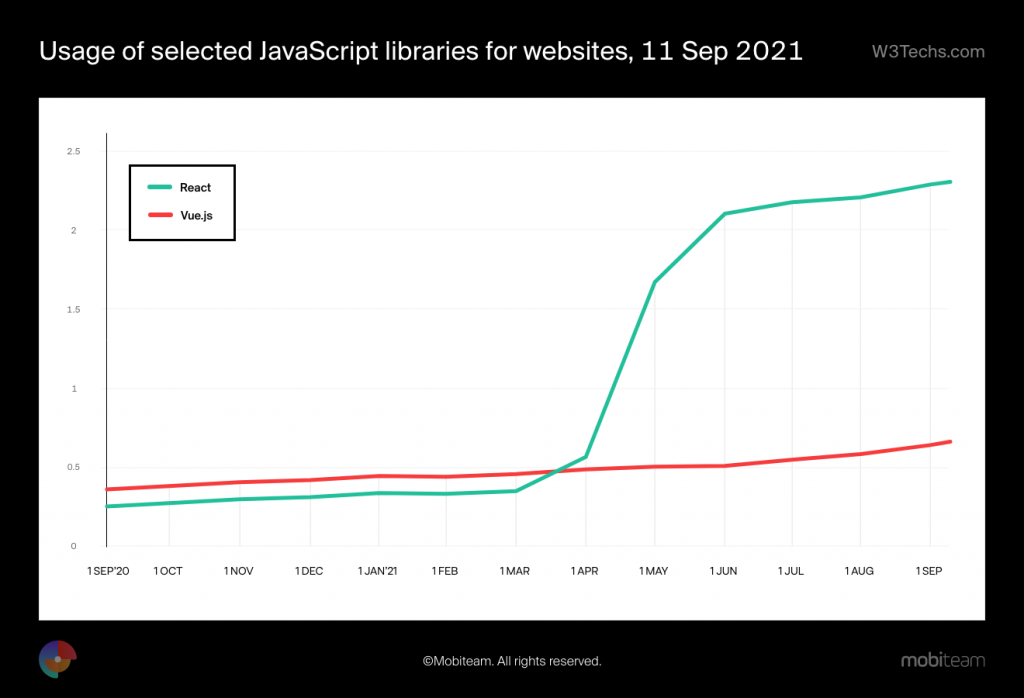 React.Js is used by smaller-traffic businesses than Vue.Js, and that’s only one theory why it became so popular in such a short timeframe – the pandemic pushed most of all small and medium businesses in the digital market.

Another factor that contributed to React.Js growth in the last period is the growing number of IT specialists and IT companies that are most of all specialized in modern frameworks where React plays an important role. 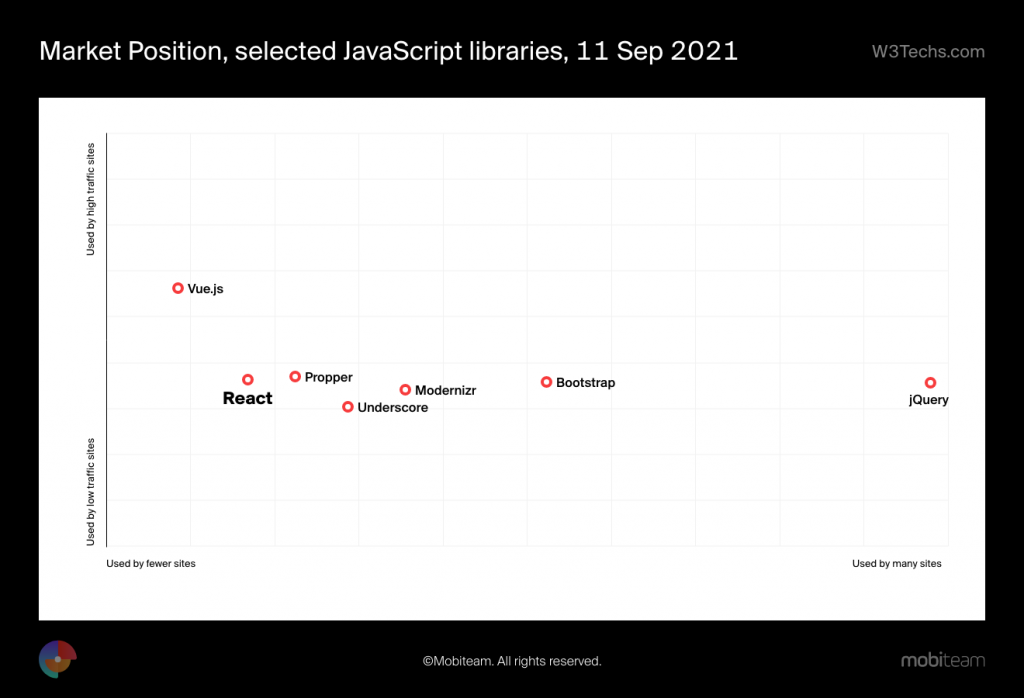 However, React.Js is still far from jQuery or Bootstrap – frameworks that developers use more and had more time to familiarize themselves.

The largest popular websites that use react according to W3Techs.com are:

The list of websites that recently started to use react include: Apple.com, Zoho.com>, and Gate.io

Compared to Vue.Js growth, React had a burst between April-September, 2021, and the wave is not over yet. Estimated, React.Js could reach 7% of all known websites usage by January 2022 if the trend continues.

Flaskis a minimal framework based on Python, and its reputation is also dependent on it. Flask is the API that allows building web applications and it is also by around 16% of all web developers worldwide according to Statista 2021 report. Most of the developers would say that Flask is the optimized version of Django – its main competitor, and that’s because Flask is easier to use and learn since it has less code base.

Generally, Flask and optimized frameworks are what nowadays developers are looking for, and since old frameworks don’t provide an optimized solution for their processes, competitors are the first ones to catch the wave. The same thing happened with Flask and Django, and many Django developers changed their main framework to Flask. 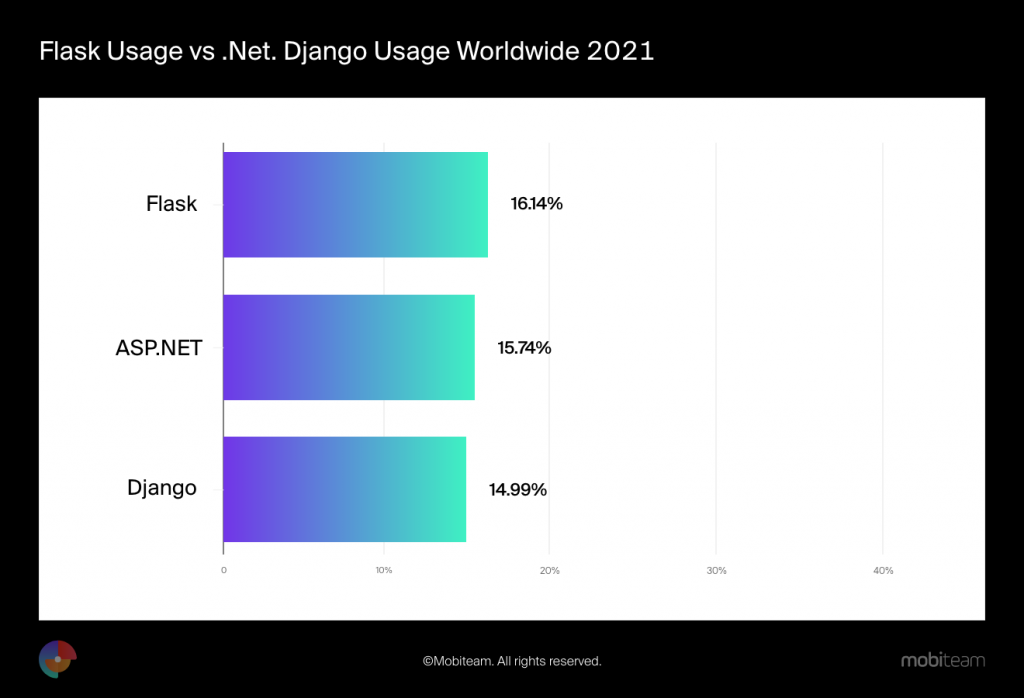 Another comparison on Google Trends reveals the opposite – Django is overall more popular in search in the past 5 years worldwide. However, at the beginning of 2021 the popularity of both Django and Flask dropped as other frameworks got more searches and respectively, more usage.

In 2021-2022 Flask is a must-follow framework as Python enhanced the support and the visibility adding several new features and a brand new visual interpretation of how Flask works.

Angular is another framework worth to be followed in the upcoming period. The framework comes from Google and it was launched right after Angular.Js failed in 2016. This time, Angular uses typescript and not Javascript and somehow managed to catch worldwide developer’s eyes and attention.

Yet not as competitive as it was expected, Angular is used most of all for corporate websites, or websites with high traffic rates – similar to what Vue is used, and it makes sense if you read about Vue more. 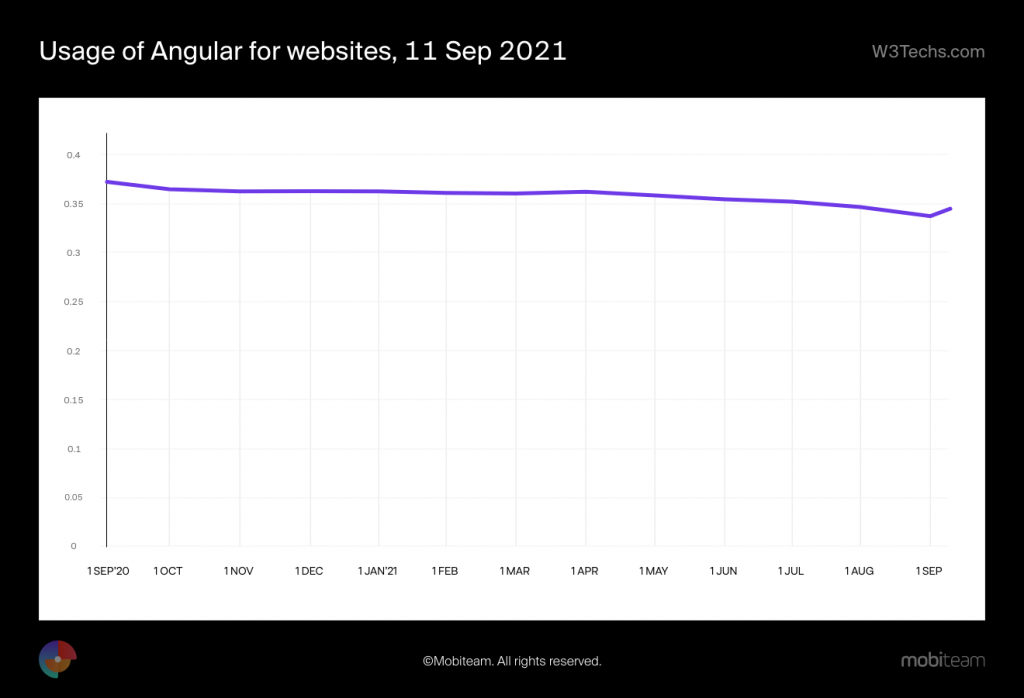 However, if Vue.Js and React.Js usage increased overall in the last year, Angular flatlined and even slightly decreased between June-September 2021. Indeed, large/corporate websites don’t spawn every day and the general trend for Angular relies on a solid direction that it was expected to slightly grow but not decrease. The one to blame may be the pandemic, market demand for such services and the choice of other companies to use one or another framework on their web pages. 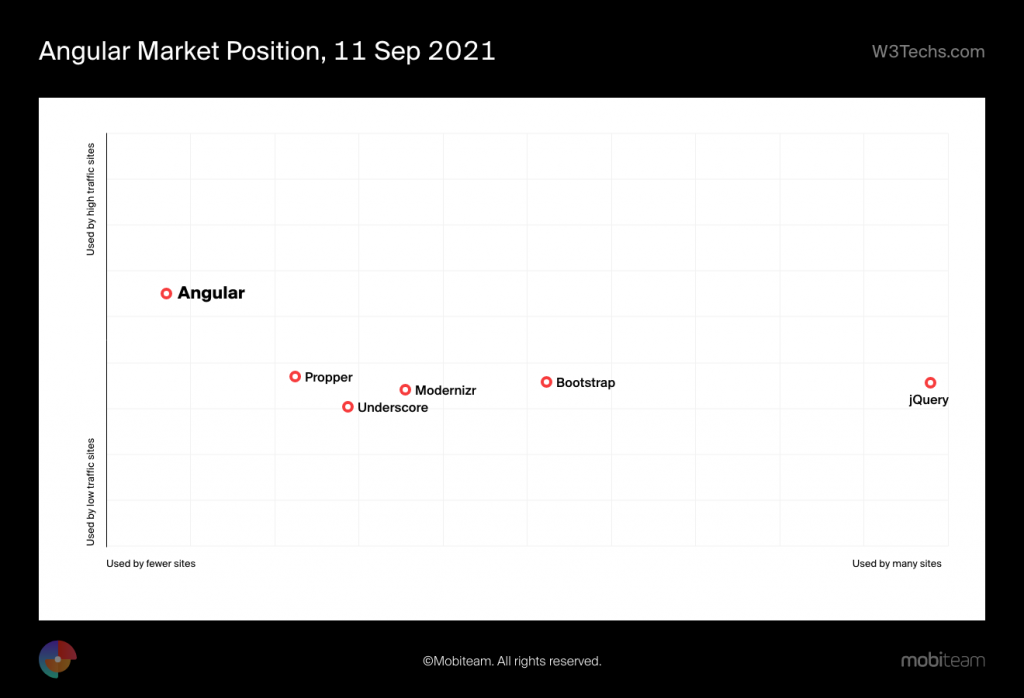 As we mentioned before, Angular is positioned extremely close to Vue.Js and shares the same market and possible preferences. But, while developing a web application based on Vue costs less, Angular developers charge more for their services, and this may explain the preference for Vue. Js in the past year.

It is interesting to follow Angular in 2021-2022 as Google will definitely make changes and improvements to its framework, or it will force the usage of Angular via other, non-orthodoxal ways at the edge of the law. But it may happen the other way around, and Google may forget about their framework for a while as it often happens with their other products, such as WearOS.

Every framework mentioned above aims to get more popularity and is close to getting leadership in the following years either because is supported by tech giants like Google or Facebook, or because of the cost/availability of developers that are happy to work. Nonetheless, Vue and Angular are Enterprise level while React and Flask are for SMB. This does not exclude that any of these frameworks are or may be used at any level.

5 Things You Should Pay Attention To When Building Enterprise Websites

At Mobiteam, we have experience building websites and digital strategies for clients of all sizes and we know firsthand the amount of work that goes into every project. Though each project comes with its own quirks and challenges, designing and building an enterprise website is an especially involved process that requires upfront investment in planning […]